Prime Minister John Briceno today reacted to Justice Lisa Shoman’s ruling that will cost tax payers close to two hundred thousand dollars. Last week, Justice Shoman ruled that former Deputy Prime Minister and Minister of Lands, Hugo Patt, be paid more than one hundred and forty thousand dollars in damages: ninety-five thousand dollars in compensatory damages and fifty thousand dollars in vindicatory damages. This has to do with Patt’s civil suit against the Commission of Inquiry members and GOB. Patt’s attorney, Senior Counsel Dean Barrow argued that the Commission failed to seek comment from Patt before publishing a forty-six-page report. Justice Shoman agreed and handed down a judgment in Patt’s favor. Briceno says he believes the amount awarded to Patt is excessive. 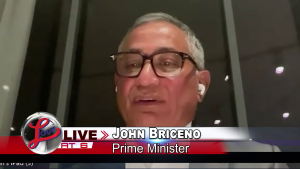 Hon. John Briceno, Prime Minister of Belize: “As you know that after this case the Attorney General will come to us and make a recommendation whether we should appeal the case. I believe it’s excessive but that’s as far as I would go and I think what we are forgetting here is that these people are getting away not because they’re innocent , they’re getting away because of technical issues, a technical process that was not followed. They’re not saying that they were not guilty you know they’re saying we were not given due process to come to represent ourselves and it is because of that technical error they are being compensated but again unlike the previous government I will not bash the courts. What we’ll do we’ll follow the process, I will listen to the advice of the attorney general and if the advice is for us to appeal that case we will appeal. I do hope that the recommendation is for us to appeal the case.”

Barrow has filed a similar suit against the Commission and government. Justice Shoman will hand down her ruling concerning damages in that matter tomorrow morning.