Upon taking up office in November 2020, the Briceno Administration had promised to deliver on their Plan Belize and provide then thousand houses for low-income families. After a year and a half in office, the Ministry of Infrastructure Development and Housing has only met ten per cent of the promised quota. During an interview, PM Briceno stated that the government is working diligently with the meager budget them inherited. 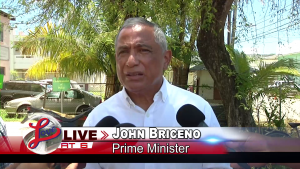 John Briceño, Prime Minister of Belize: “I think that you all are missing the picture, the big picture. Yes we put 10,000 homes and we want to build 10,000 homes but when we got into Government, we received a wreck of an economy, that Government was bankrupt. We were at the verge of a devaluation and many people don’t understand and seem to appreciate that and just holding on to 10,000, 10,000. Look at the amount of homes that we’ve built in just a year and four months and compare it to the amount of houses that the UDP built after 13 years. After spending $500 million of Petro Caribe, $600 million of our oil money, plus hundreds or millions of dollars that they borrowed. Billions of dollars were spent. Here we’re building low cost housing, well built and subsidised, partially subsidised by the Government for mostly single mothers and people that are living in some shacks. Yesterday in Orange Walk Central, to this young lady, we gave. We gave to Fannie. We gave her a house. She and her 16 year old. Her 16 year old was telling me, he said “Mr. Johnny, I’m so excited to get into my new house.” When you look at the shack where these people are living to what we are doing for them, that’s supposed to be the story and not the 10,000. If we can get to the 10,000, please we’ll do. We’d move heaven and earth to get to 10,000. But look at the houses and the people, the lives that we’re touching that is so emotional when you see them getting these houses. We will continue to build homes.”

Briceno stated that his government is also looking into identifying large parcels of land where they will be able to construct several houses at a time to be able to deliver on their promise.