Just before news time on Wednesday, the Ministry of Foreign Affairs stated that given the situation, Rosado relinquished his diplomatic postings overseas. Rosado was an integral part in Belize’s defense against Guatemala’s unfounded claim. When there was a change of government, Rosado was removed as Belize’s Ambassador to Guatemalan and placed as the Ambassador to the European. Foreign Minister Eamon Courtenay is quoted as saying that the assignment was made after careful strategic consultation given that Rosado’s posting to Brussels places him close to The Hague, the seat of the Court, and other European capitals where Belize’s llegal team is based and where further research is being undertaken as Belize’s counter-memorial is drafted. The counter-memorial is due in June so we asked Ambassador Said Badi Guerra if the recent developments put in any way Belize’s case at a disadvantage.

Said Badi Guerra, Former Ambassador to Cuba: “I hope that he is kept in the loop and he continues working with this situation while everything just, while we get the truth, everything comes out noh? I don’t think we should, the Government should just put him aside. We cannot do that. We cannot do that. The Government needs to know that we need him.”

Reporter: Why do you think, from your perspective, his input would be so important?

Reporter: Do you think, in your opinion, that this is going to weaken Belize’s case as we continue to push towards this memorial that’s due sometime in June?

Said Badi Guerra, Former Ambassador to Cuba: “I believe it will. I believe it will because we don’t have the, so to call it, mastermind. You know? Many people know Ambassador Rosado but do not know him the way we know him because we used to work for him. We used to work with him, not only for him but with him and I personally worked with him on the Belize-Guatemala issue when he was posted in Guatemala and he appointed me Director of Consular Matters, border issues, especially with Guatemala and if you recall, I was the one who used to go and deal with all the incidents of Belizeans being stranded in Guatemala or whatever it is. So we had a very close bond, very close working relation and I got to know him and I got to admire him more and more. I stood with him and worked with him on all the awareness leading to referendum day all across the nation and it’s a tremendous loss. It’s a tremendous loss. That’s why I say Belize owes this man a lot. The Government, both administrations owe this man a lot and we as well.”

Guerra says that he has known Alexis Rosado for thirteen years and has never seen any sign of any criminal like tendencies.

Said Badi Guerra, Former Ambassador to Cuba: “We used to hang with him in the office as professionals and we also knew him on a personal level and at no point in time did he show any of such behaviour but on the contrary, Ambassador Rosado has always watched out how he does things, what he says, how he moves, his actions, you know? There’s one thing today that I learned, first of all, from two people that I’ve always admired and I always looked up at were the late Ambassador Maritnez, may his soul rest in peace, and Ambassador Rosado. I used to get. I remember getting upset with things that happened. You know? Or things that people would say to him or do to him and he was so calm and he said “Just take it easy.” I would get upset and he would always be saying “Take it easy man. Take it easy.” He used to always, or he is the type that is very prudent in what he does, what he says. Whether in office or outside the office, he knows how to comport himself. He knows how to carry out himself, always, always looking after his position and looking after the Ministry of Foreign Affairs because he always, always told us “Keep in mind, remember who you are and who you represent regardless where you are.” 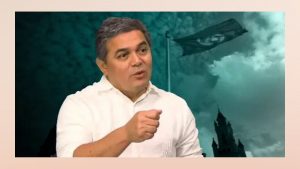