Tonight, a relative of three Belize City men accused of being members of the Supal Street Bloods/4th Genna Gang is speaking out against what she says is police harassment. Marie Alvarez, who is the mother of Reese Fitzgibbon, and the aunt of Jason Anderson, and James Fitzgibbon, says the men are being wrongfully accused. Last week, the trio was remanded to prison after they were charged with “being the members of a gang”. According to Alvarez, the men are innocent. 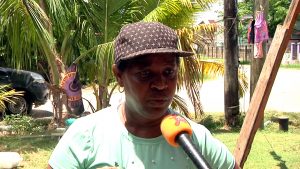 Marie Alvarez, Mother of Reese Fitzgibbon: “I don’t like the way how the police they do it here because first of all they put 4th Genna on those boys, better known as strike force. I am a 4th Genna too and I want them to know that if I am a 4th Genna, that means I should go to jail too. Do you understand me? And I don’t understand Chester because they killed my son like two months ago too and I am not with Chester because when they killed my son they didn’t go and pick up anybody from southside and put them as gang members. That’s all I want the police to get to know. I am not happy with any of them right no”

Reporter: Is your son and your nephew gang members?

Marie Alvarez, Mother of Reese Fitzgibbon: “No. My son does chair. I am not pointing fingers and I am not sweating fevers for my son. I know my kids. When my kids do anything and they are hungry and broke, I am the one who sends money for them. Chester, I can’t even go to their office and beg them for a dollar to go and buy bread for my kids, or sugar, or egg.”

Reporter: So you believe that they were wrongfully accused of being the members of a gang?

Marie Alvarez, Mother of Reese Fitzgibbon:  “Yes. I know they put that charge on them because they can’t put murder on them so they try to put gang on them to send them up to jail, which is not fair. Those police are the biggest bloody criminals in this Belize country right now. My son made a report November 8th about the police when they shot him and I filed a lawsuit against the police and right now, up to now no lawsuit. Nothing went to Belmopan to say yes we filed a lawsuit with the police them. Nothing in Belmopan in writing with those police. Nothing.”

Our archives show that Anderson and Reese Fitzgibbon are no strangers to the law. In 2018 the duo was charged with two counts of attempted murder, two counts of use of deadly means of harm, one count of wounding, and one count of dangerous harm concerning a shooting incident where a 54-year-old man was shot on Iguana Street. And, again in 2017, Fitzgibbon was found with a loaded nine-millimetre pistol after he fled from a shooting scene on Kut Avenue in Belize City. The group returns to court on June 22.