A fire on Sunday morning claimed the life of 39-year-old Tessie Camal. The fire broke out at around one o’clock in the Faber’s Road area. Camal’s body was identified by her common-law-husband 39-year-old Bruce Garbutt. Reporter Giovanna Moguel has the story.

Giovanna Moguel, Love FM News: A house fire in the wee hours of Sunday morning led to the tragic passing of Corozal native, Tessie Camal. Firefighters were called out by the residents of Faber’s Road Extension just after midnight to a wooden house that was engulfed by flames. The station supervisor of the Belize National Fire Service, Kenneth Mortis, explained further details.

Kenneth Mortis, Station Supervisor, National Fire Service:“”To date there are speculation into the cause but there isn’t anything concrete. We know that the fire started in the south western portion of the building which would have represented the bedroom that Ms.Camal was in. We found that she was in a face down position.”

Giovanna Moguel, Love FM News: Camal’s charred body was identified by her common-law husband, Bruce Garbutt, who had left their home en route to work hours before the incident occurred. Our newsroom spoke with one of the neighbors who was awoken when they felt a burning sensation emanating from the walls of their house. The neighbor says they ran outside to render assistance, but by that time, the structure was unsalvageable.

Faber’s Road Resident: “My little brother got up and he is like went into my mommy and daddy’s room and he was like “Mr.Bruce’s house is on fire.” so when they ran out there were already people out here already but when we came out the house was already under flames and we were trying to assist but nobody could get in the house because the house was already on fire and his girlfriend was in the house at the time and the neighbor came and he stomped the back door to try to get in but the fire was already run out but before that we heard the person like they ran but when they ran it was like you heard them fall, one hard “boof” and that was it. The whole house went in flames.”

Giovanna Moguel, Love FM News:  Garbutt told police that he tried to contact Camal earlier in the night but was unsuccessful. There have been speculations by the public of whether or not this house fire was accidental or intentional. Police Press Officer, Fitzroy Yearwood, explains that the police have launched an investigation to ascertain what the spark that ignited the flames was. 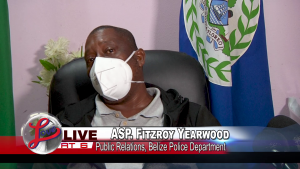 ASP. Fitzroy Yearwood, Public Relations, Belize Police Department: “At this time it was reported that she was home alone so we would have to wait for the fire experts to submit their report to us to rule out any form of criminal intentions or so.”

Giovanna Moguel, Love FM News:  Mortis explains that it could very well be accidental, however, that does not rule out the possibility of it being intentional.

Kenneth Mortis, Station Supervisor, National Fire Service:  “It could well be an accidental fire, it could well be a malicious act. When we arrived on the scene fire fighters found the backdoor of the building open. We know that the room she was in lies literally across from the front door so had she been conscious we believe that she could have made her way out of the building, out of her room and literally straight across the front door. How she managed to have been found in that position is still undetermined. Whether or not she succumbed to her injuries before the fire that will be determined based on the results of the post mortem and hopefully we can move from there.

Giovanna Moguel, Love FM News: At this time the cause of the blaze that claimed the life of the Corozal woman remains unknown. Giovanna Moguel for Love News.