A wooden home in the Cet Site Area of Belize City was destroyed by fire at around ten o’clock last night. Police say that forty-two-year-old Devon Geban was awakened when he felt a burning sensation in his body. He then saw flaming pieces of toilet paper on him and his common-law wife, fifty-year-old Clarine Castillo, standing over him and behaving boisterously. Geban reportedly snuffed the pieces of toilet paper and Castillo exited the bedroom and then proceeded to the kitchen where she gathered debris in a container and incinerated it. The fire got out of control and destroyed the house. Police are currently investigating the situation and authorities indicate that this could be a case of domestic violence gone too far.

Neighbor, Eyewitness: “First I heard a boom but I didn’t pay it much noise because I felt it was just my daughter probably dropped something inside and then I heard my father shouting and making noise like “Fire. Come out side.” and my sister came out and was trying to assist but it flamed up fast. I was scared it would lead up to my house and I was worrying about the neighbor because it was spreading fast that’s why it had me wondering what really started it.” 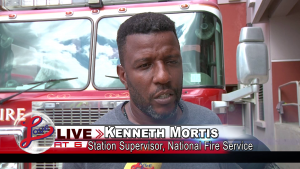 Kenneth Mortis, Station Supervisor, National Fire Service: “An alleged domestic dispute lead to an enraged Ms.Clarine who unconfirmed reports is that she is responsible for the structure being burnt down. Of course the team on the ground last night and through this morning tried to gather information to ascertain whether these allegations are factual, of course she replied by no comment. We can only give account to what Mr.Jovan is saying. We have gathered that this family has been going through this domestic abuse for over a period of time one can only imagine that Ms.Clarine being the recipient of part of this abuse probably finally had enough and last time would have been what we term the last straw that broke the camel’s back. The fire started from the front of the building which we would classify as one of the bedrooms and then it worked it’s way up and out and throughout the structure. It was only a matter of time before the fire engulfed the interior of the building. Our personnel arrived on the scene and found this structure fully engulfed in flames and with the help of neighbors on standby we managed to contain this fire before further damage could have been done to nearby structures.”