Earlier, this afternoon there was another gang mediation meeting held with several gangsters from factions in Belize City. The meeting was led by the Leadership Intervention Unit, and the Department of Youth Services. Love News understands that the meeting was a part of the LIU’s response to the rise of gang-related shooting incidents. Our newsroom had camped outside of the meeting venue and sought comment from Chairman of the LIU William Dawson. We weren’t that lucky as Dawson refused to comment. Commissioner of Police, Chester Williams, however, did speak on the meeting late this evening. According to Williams he was invited but had refused to attend.

Chester Williams, Commissioner, Belize Police Department: “I was invited to that meeting. I said I’m not going to talk with no gang member. I believe that I have spoken enough with these people and for me, at this time, it’s no more talking. Mr. Rosado is engaged with the L.I.U. in those discussions. I am not going to be a part of it. I don’t want to be a part of it because at the end of the day as I’ve rightly said, we have taken enough time to speak to these persons and yes while we see that some of them are changing, we’re going to continue to work with those persons who are changing and those who continue to go out and act like terrorists, we have to send a strong message to them so that they understand that we have had enough.”

Reporter: Sir we know that the young man Sanchez was a part of a mediation meeting on Thursday, on Tuesday morning sorry and he went to commit an execution like you said on Tuesday night. Does that not speak to the fact that these continuous meetings aren’t working?

Chester Williams, Commissioner, Belize Police Department:  “I am not sure if he was a part of any mediation. I don’t know of any recent mediations but perhaps, he could be. As I said earlier, I do not partake in these mediations. I believe that my role as the Commissioner, I must stand firm in ensuring that I do what I can with the assistance of my officers to make the people of this city safe and if it is that we’re going to have mediations and people are going to take it seriously then I have no issue participating. But if it is as you’ve said that he was in one on Tuesday and next night he was out to carry out an execution then what does that say? What are they taking us for? It cannot be that they try to take us for a ride or believe that you can come to mediation or be a part of a program during the day and night you become a gunman. It cannot work and at the end of the day, we must ensure that we continue to deal with those young men or gang members who wish to terrorise the people of this city.”

Compol Williams was asked to comment on whether he was aware that one of the gang members that attended today’s meeting was allegedly involved in last night’s shooting incident. Additionally, he was asked if he is in support of the police department actively working with known criminal elements.

Chester Williams, Commissioner, Belize Police Department : “As I said, I don’t know who are parts of the meeting. I know Mr. Dawson had asked that we get some of these young men who were in custody and he was going to invite others to a meeting today at Old Belize. I welcomed the move by Mr. Dawson because I can see where he genuinely is trying. Mr. Dawson is out there night and day giving his time that he could be spending with his family with these young men all with a view to see what he can do to influence them to make that necessary change and so I applaud him for the continued effort and it is something that I personally believe we cannot give up on when it comes to those who want to change. Yes, when it comes to those who do not want to change and continue to display that propensity for violence, we cannot be a part of any meeting with them. We’re not going to no brute force. While I say police will go hard, the police are going to do what needs to be done within the scope of the law. There is no need for us to apply unnecessary force. Even though I know for a fact that some of them will cry foul and you will entertain them as you normally do, even Vejea because Vejea has his own strategy too where he tends to give things his own spin right.”

Chester Williams, Commissioner, Belize Police Department : “Yeah he’s bad at times but he’s my friend. Right, Vejea? At the end of the day, I don’t think that it’s an effort in futility for the simple fact that while yes we do have some of these young men who come to these interventions and mediations and leave from there and do the contrary of what they agreed to do, there are still those who really and truly are trying and hold true to their words and held their corner and at the end of the day, we must ensure that we give credit to those who are trying to make the change. We don’t expect to save everybody but if we save one or two, we certainly would have done a good job because one or two families would be happy to know that they have their loved ones with them who are alive and providing for them.” 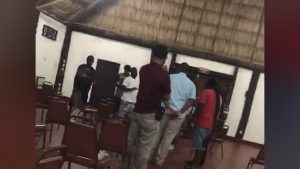